Over the past decade, the market has seen an increase in remarkable online slots. There are thousands of games to choose from, and new ones pop up each week. It’s difficult to discern which ones you should play and which ones to skip, as they all feature perks such as bonus free spins.

While graphics and intricate gameplay are essential, what matters most is what you can collect? Is the slot you are thinking about playing worth it? Below, we answer which ones are and your chances of landing hefty prizes while spinning their reels.

How We Find the Best-Paying Slots

When considering a game, always check the return-to-player percentage. It tells you how much it will pay back to those that play it over time. Meaning, if the RTP of a slot is 95%, for every $100 wagered, it will give back $95 in winnings over time. The RTP average in the industry hovers around 96%, so avoid games below this limit.

Slot volatility, also known as variance, is another crucial factor that you should consider. It determines how often the game will payout over time. If you are playing a low variance game, it will let you win often, but low amounts. On the other hand, a high variance slot will rarely payout, but those wins will be massive when it does. You may be able to see the hit frequency for some games, which exactly shows how often you can expect to win a prize per spin. 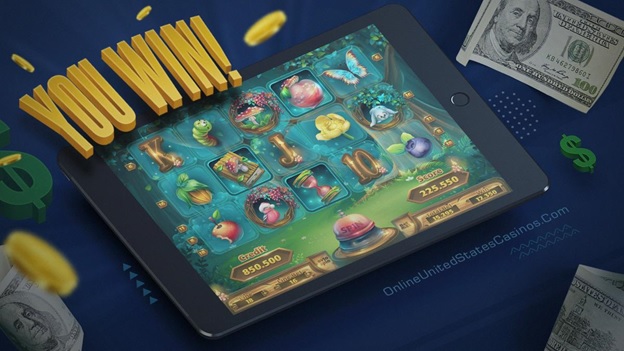 The max exposure tells you the maximum win amount a game can yield. For example, if the max exposure is x10,000, that means that the most you can win are prizes worth up to ten thousand times your initial bet.

On top of all these numbers, we also scan message boards and Reddit threads to read about other players’ experiences and see if someone has figured out the RTP’s of games that do not list them. That said, the simplest way to locate the best online slots that payout is to go through casino sites and look through their review tables. Select the best online slots rated by sites like OnlineUnitedStatesCasinos.com, a terrific info platform on everything online casino related.

Swindle All the Way

Realtime Gaming, better known under the acronym RTG is one of the industry’s pioneers and the company that most caters to players from the US. In 2017, it set loose on the world one of its most well-known titles that turns the notion of a Christmas-themed slot on its head. It features two Home Alone-like burglars in this beautifully-designed reel-spinner that offers a maximum win multiplier of x33.

Swindle All the Way is a five-reel, three-row slot that features twenty-five adjustable paylines. The RTP is a terrific 98.5%, and the max exposure is x412,500 your bet. Thus, this is one of the best paying online casino slots ever.

1429 Uncharted Seas is a sea voyage-themed game that mixes mythology and old-style illustrations. It is a five-reel, three-row slot that has an expanding wild feature and twenty-five paylines.

If you are sick of games utilizing classical history, here is a Relax Gaming product that offers a unique take on the Roman Empire via cartoony graphics and an epic soundtrack. Marching Legions is a 2020 slot full of bonuses that can lead to decent payouts for those worthy enough to be legionnaires.

The game plays out on a five-reel, three-row grid that lets you access 243 paylines. It has a very impressive RTP of 98% and can let you claim a prize that is worth x10,000 your bet. The hit frequency is 25.62, and the max bet is $100, making it one of the best online slots that pay handsomely.

A NetEnt classic. To say that it first saw the light of day on Halloween 2013 would be a poor choice of words, seeing as this is a vampire-themed offering. Blood Suckers has had a growing fanbase ever since it hit online casinos thanks to its chilling storyline and legendary payback percentage of 98%.

It is a simple five-reel, three-row, twenty-five pay-line game with low variance and a max exposure of x900. With a max bet amount of $50, you cannot win a massive amount playing it, but you can win often.

We all have an angel on one shoulder and a devil on the other. Betsoft knows this, and it incorporates the idea in this terrific 3D game, where an angel character floats on one side of the screen, and the devil one on the other.

However, it is not its visual beauty, complete with 3D models, that make this 2014 slot stand out. It is its RTP of 97.79% and progressive jackpot within its Money Wheel Bonus feature that makes it one of the best paying online slot games.

Quest to the West

The second Betsoft entry. One of the newest games on our list. In 2020, the industry juggernaut decided to tackle ancient China and its legends by utilizing the Monkey King as a slot character.

Another classic. An RTG release from 2011 that brings the world of horse racing to the slot-verse. It features symbols the likes you would expect. Elegant ladies, horses, jockeys, binoculars, and more, as it captures some of the racing track’s charms.

We have not talked about jackpots a lot, so here is another chance. Derby Dollar has a progressive jackpot prize. So, if you are wondering which online slots payout the most? Know that it is those that offer progressive rewards where the pool builds until someone takes it all. Besides the jackpot, Derby pays out small wins often and has a return-to-player of 97.5%.

Another RTG slot makes our list, as this time, it is a title that incorporates the magical world of fairies and unicorns. Though almost a decade old, Enchanted Garden is still very popular, especially among US players. It has a max exposure of x25,000 and an RTP of 97.5%.

The graphics in this game are quite colorful, and the stirring soundtrack will make you feel like you are in the mystical forest searching for the Scatters that will get you in the free spins round.

Join Sam on his journey through the African jungle as you take in all the wild-life and nature it has to offer. The 3D slot from Betsoft does its best to capture Africa via cartoony visuals that shall brighten your day and do the continent justice.

It is on our list because you can make a single bet worth $150 and hope to win a prize x250,000 your stake. Safari Sam is a medium variance slot with a payout percentage of 97.5%. It is not among the top payout online slots, but it is still a terrific choice.

Released in 2019, Mermaid’s Pearls is a medium variance game that plays out on a five-reel, five-row grid and provides 3,125 ways to win. The slot features jaw-dropping visuals as you spin reels in an underwater paradise.

It has a payout percentage of 97%, and you stand to win as much as $125,000 in the bonus round. Though not the most unique game out there, it has a retro 90s arcade-feel that many will love.

Highest Paying Reel of All

It is not comfortable tracking down the highest payout online slots, as many aspects come in to play. We have not even gone into availability. A terrific game may exist, but what if it is not available for players from your region? Thus, we recommend Fruit Frenzy as a vintage, easy to play slot with a massive win-potential of x100,000 your bet for US ones. So, how much can you win? Well, with a max bet size of $125, you do the math.

From everything above, it is clear that providers such as Realtime Gaming (RTG) and Betsoft are those that create slots that payout the most, and often. Therefore, if you are a US player, we suggest finding a Las Atlantis coupon code or one for platforms such as Super Slots or Wild Casino and start playing. El Royale casino is another terrific option.